Philippine Airlines Promo 2015: What’s on your travel bucket list? Check out our latest #PALPromoFare to destinations in Luzon and Visayas and start planning your next big vacation! If you are traveling to Luzon, you can check out Basco, Busuanga, Masbate, Naga or Laoag. If you are heading to Visayas, Cebu, Bacolod, Dumaguete, or Tagbilaran is a perfect destination! 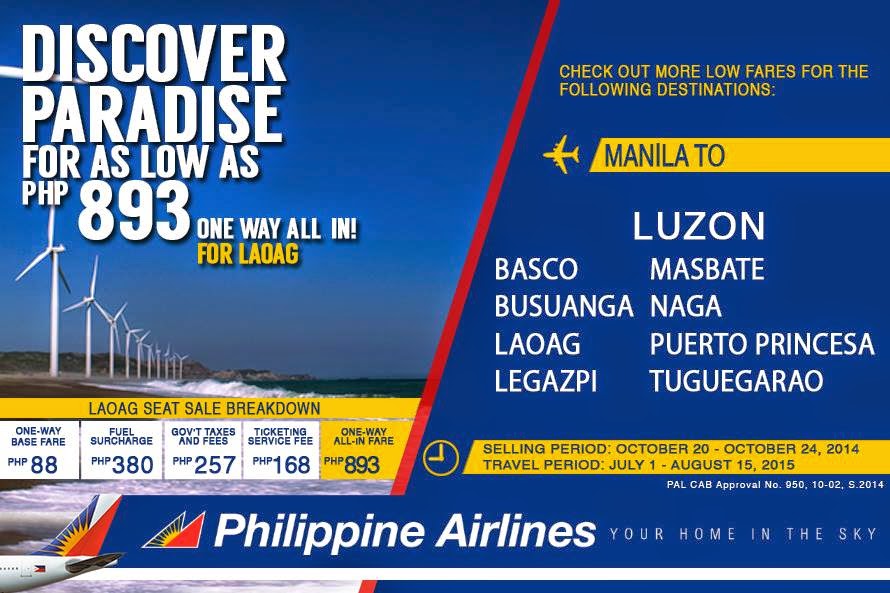 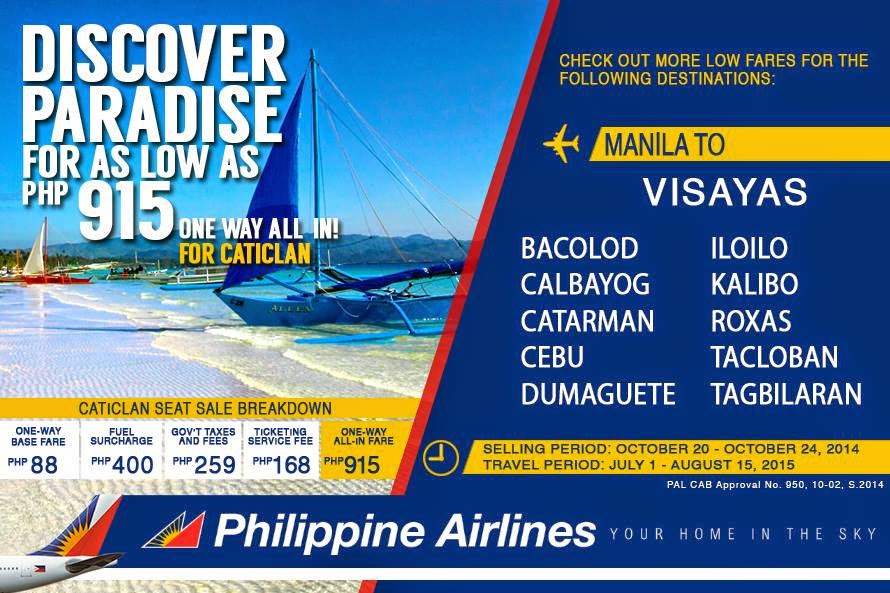 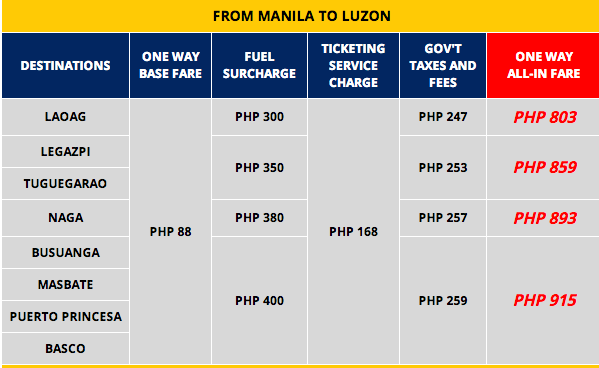 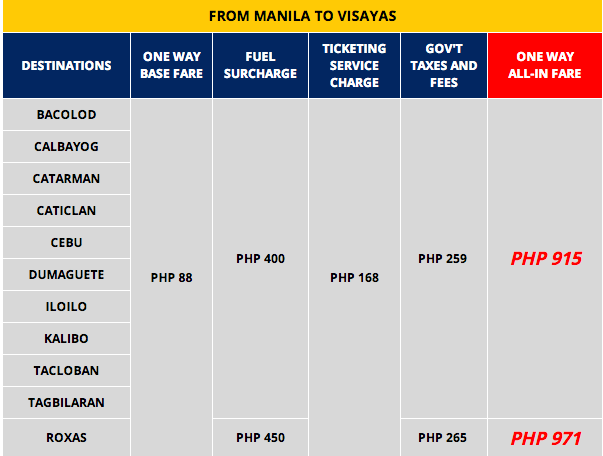 One-way Economy fares are inclusive of fuel surcharge (from PHP 350 to PHP 450 per way), 12% VAT, Domestic Passenger Service Charge/Terminal Fee (PHP 200 for outbound Manila and Cebu), Aviation Security Fee (PHP 15), and Ticketing Service Charge (PHP 168 which may vary if purchased from travel agencies). Promo fares are refundable at PHP 1,500 per sector (VAT Inclusive). Re-bookable at PHP 1,500 per sector (VAT inclusive) plus applicable Fare Adjustment. Ticket is considered no show if ticket is not reissued/refunded at least 4 hours prior to flight departure. Go show at later flight not allowed. Infant discount: 90% discount for infant without seat. Senior Citizen and Person with Disability discount: 20%. 75% Mabuhay Miles Mileage Accrual. Book and Buy rule applies. Promo is offered for limited seats only. No show policy will apply as approved by the CAB. Other travel conditions apply.


Philippine Airlines Promo 2015: No dream is too big when you're in New York! Starting March 2015, Philippine Airlines will start flying to the Big Apple. This is a round trip all-in fare! For just Php 52, 129. Just refer to the details below! 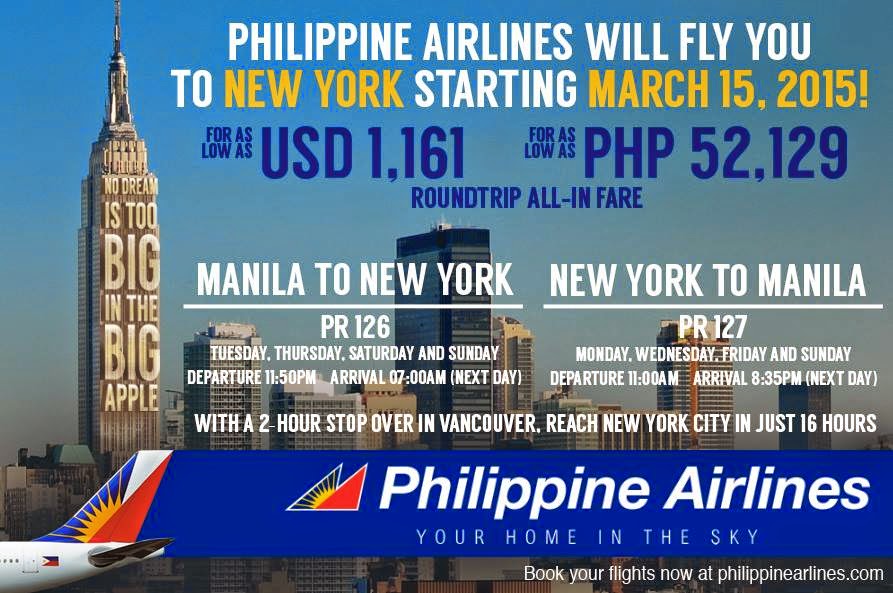 Book your flights now at http://www.philippineairlines.com/!

The four-times-a-week service – Manila-Vancouver-New York – will operate at Terminal 1 of New York’s JFK International Airport. PAL will have full traffic rights between Vancouver and New York.

The addition of New York will bring to five the total US destinations, following Los Angeles, San Francisco, Honolulu and Guam.

The flight to New York – distance of 14,501 kilometers or approximately 16.5 total flying hours – will be PAL's longest route.

Flight PR 126 departs Manila every Tuesday, Thursday, Saturday and Sunday at 11:50 p.m. Arrival in Vancouver is 8:50 p.m. on the same day. After a two-hour transit stop, the service continues on to New York at 10:50 p.m., touching down at Terminal 1 of JFK International at 7:00 a.m. the following day.

PAL will utilize the Airbus A340-300 jets, which seats 36 passengers in business class and 218 in economy.

On board, passengers can expect to be pampered with PAL’s signature “at home” in-flight service, which features business class seats that convert to full-flat beds; in-flight entertainment system such as audio-video on demand in business, and gourmet cuisine designed by top international guest chefs.

The New York service will have the added benefit of boosting PAL’s Canadian operation. From March 15, 2015, the current daily service between Manila and Vancouver will spike to 11 flights weekly with three departure times from Manila – mid-afternoon, early evening and late evening – providing wider schedule choices to passengers.

Manila-Toronto will add a fourth weekly frequency, increasing capacity on this long-haul route in time for the peak summer travel period out of Manila.

PAL’s return has been keenly anticipated by the huge Filipino-American communities along the U.S. eastern seaboard ever since the flag carrier pulled out of the region in 1997. About half a million ethnic Filipinos reside on the East Coast, with over 253,000 in the New York-New Jersey metropolitan area, 90,000 in Virginia, 75,000 in Washington, D.C. and environs, and 31,000 in the Philadelphia metro area. Overall, Filipinos on the East Coast account for 15% of the estimated 3.4-million-strong Filipino population in the U.S., comprising a natural base market for PAL.