PAL Promo Fares: Last month in June, Philippine Airlines has released a promo fare for those traveling from Cebu to Bohol. This time, the airline has introduced another promo fare of Php 825 from those coming from Tagbilaran (Bohol) to Cebu as it unveiled their new daily flights with the said route with their Airbus 320 that started June 23, 2017. Boholanos can definitely enjoy an island trip with just a plane ride going the the Queen city of the South, Cebu. The Visayan metropolis is leading in commercial, housing and state-of-the-art infrastructure to form its cityscape. But not only that, it has wonderful beaches just minutes away from the city! What an ultimate escape from the bustling city. 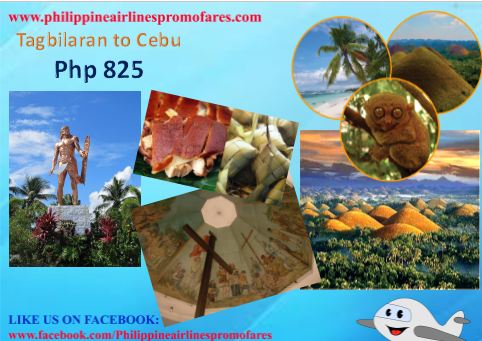 Just like the island of Bohol. Cebu also boasts some tourist attractions  with its crystal clear beaches and world-class resorts, flower garden in Sirao, Celosia Flower Farm and the Terrazas de Flores Botanical Garden. And if you want to see the sea giants, the whale sharks, you can head-bound to Oslob at the Southern part of Cebu.