Enjoy inflight meals on the seat of your choice with the enhanced EconoLight. Book the NEW domestic and international EconoLight seats now! Get great value to ALL PAL Domestic flights and selected Asian Destinations. Priced lower than regular Economy Fiesta Class targeted to the budget-conscious segment of the travelling market.
Only available for purchase through the PAL website. 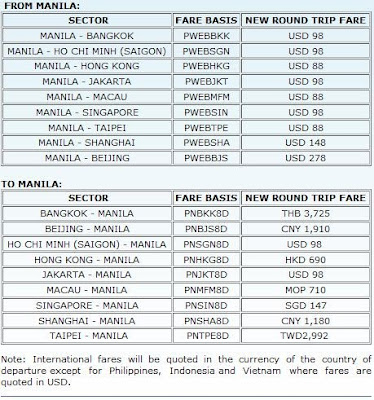 Note: Airline fares are subject to change without prior notice

Get the special promo Mabuhay (Business) class fare from Tokyo to Manila for JPY 77,700 (roundtrip fare).

Fare is EXCLUSIVE of surcharges, government taxes and other fees that are to be collected at the airport.

Note: Airline fares, government taxes and fees are subject to change without prior notice.

Available at www.philippineairlines.com or call PAL Reservations at (02) 855-8888 or visit PAL ticket office.

Book and buy your tickets now!!