PAL Midnight Special runs every Sunday from 12:01 am to 6:00 am(Manila time). Valid only at www.philippineairlines.com.  Limited seats only! 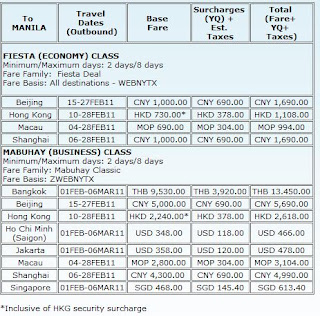 Notes:
-Fares are based in the currency of the country of departure
-Fares are INCLUSIVE of surcharges and estimated taxes. Other airport fees and charges are not included.
-Fare amounts are subject to change due to conversion rates.


Of course, more PROMOS you can find at the SIDE and TOP of this post. Feel free to click and check them.
click: LIKE US ON FACEBOOK FOR MORE PROMO UPDATES
For the Chinese New Year holidays, a PAL promo dubbed “Grabbit!,” in celebration of the upcoming Year of the Rabbit, drops PAL fares to a flat rate of P1,102 for a one-way flight on Fiesta Class (economy) between Manila and any point in Luzon or Visayas.

For one-way flights on Fiesta Class between Manila and any point in Mindanao, the promo fare is P2,011.

The discounted fares are available for ticketing until January 24, 2011 and are valid for travel from February 1 to March 23, 2011.

“I am happy to announce that we will extend our visa-on-arrival facility to nationals of…the Philippines…with effect from January 1, 2011,” said Indian Prime Minister Manmohan Singh in a recent speech before the 8th India-ASEAN Summit in Hanoi, Vietnam.

“We invite many more tourists from the ASEAN countries to visit India to see the splendor of its rich cultural heritage,” the Indian leader added.  Citizens of three other ASEAN states, Cambodia, Laos and Vietnam, will also enjoy the same relaxed visa rules.

The direct service (PR758) departs Manila every Tuesday, Thursday and Sunday at 9:10 p.m.  Arrival at the new Terminal 3 of Indira Gandhi International Airport is at 1:10 a.m. the following day.

The one-stop service via Bangkok (PR752) meanwhile, departs Manila every Monday, Wednesday and Friday at 6:45 p.m.  Arrival in the Thai capital is at 9:05 p.m. the same day and in Delhi at 1:10 a.m. the following day.

Modern, wide-body Airbus A330-300 aircraft, which seat 42 in Mabuhay Class (business) and 260 in Fiesta Class (economy), will be deployed on both routes.

The Delhi inaugural will give PAL a presence in South Asia for the first time since 1994 – a fitting milestone for the Philippine flag carrier, just days after it celebrates its 70th founding anniversary on March 15, as Asia’s first airline.

The addition of Delhi expands the PAL international network to 26 points in 15 countries and territories.  The airline also flies to 20 points within the Philippines.-Philippine Airlines

Philippine Airlines:PAL confirms 'regret' letter, but does not condone utterances, nor sides with Rep. Magsaysay

Philippine Airlines (PAL) today (Jan. 18) confirmed that it wrote a letter in response to the complaint filed by Mrs. Attala Magsaysay after her husband, Congressman Eulogio Magsaysay, had a verbal altercation with one of PAL's customer service agents (CSAs) last Dec. 17.

In that letter, PAL conveyed its "sincerest regrets" for the Magsaysay family's disappointment over the "manner by which our CSA responded to his request regarding seat assignment."

PAL also told Mrs. Magsaysay that the airline has referred her complaint to the appropriate department for investigation.

PAL, as a matter of practice, responds to customer complaints. After all, as a service company, PAL believes that all its employees must accord its customers the best possible service both on ground and in flight.

We must stress however that the PAL management does not condone nor sides with Cong. Magsaysay for whatever utterances he made against Ms. Sarah Bonnin Ocampo.

Ms. Bonnin-Ocampo, who has been with PAL for 18 years, has every right to file cases before the Ombudsman and the House Ethics Committee. We would rather not comment further as the matter is now sub judice and formally under investigation.

Internally, PAL is reviewing the case and will be coming out, in the coming days, with its findings and recommendations on how best to serve its customers and prevent similar incidents in the future.- Philippine Airlines

PhilippineAirlines: Year of the Rabbit Sale


Of course, more PROMOS you can find at the SIDE and TOP of this post. Feel free to click and check them.

Eight (8) flight pursers of Philippine Airlines (PAL) will be retired by the airline management effective January 16, 2011 after a Makati court removed all legal obstacles for their separation from service upon reaching the mandatory retirement age of 55.

Uybarreta said the Makati court lifted the injunction order last January 4, 2011 after it was convinced that whatever damages may be sustained by the flight attendants – if it will be proven later that they should be retired at 60 – “maybe computed, taking into consideration the salaries and benefits that they will earn if they retire at the age of 60, and not 55.”

However, the judge required PAL to post a P5-million counter-injunction bond to answer for any or all damages the flight attendants may sustain if the Court later determines that PAL is not entitled to the lifting of said injunction order.

Uybarreta said that contrary to claims by the Flight Attendants and Stewards Association (FASAP), the retirement order is not in defiance of the Department of Labor and Employment’s December 23 ruling setting the retirement age of female flight attendants at 60.

“The DOLE ruling on the FASAP case is not yet final and executory as PAL is seeking reconsideration of the same. Pending a final determination of the real mandatory retirement age, it is PAL’s position that the current retirement age brackets as outlined in the existing CBAs between PAL and FASAP should prevail,” he stressed.

“FASAP condemns PAL’s action when it is merely complying with the ruling of the Makati RTC, which, for all intents and purposes, is a valid and enforceable order as against the decision of Secretary Baldoz which is still under appeal,” said Uybarreta.

He stressed that it is absurd and contrary to common sense and established legal principles if PAL will not comply with Judge Pimentel’s order.

In July last year, the same court granted the petition of the eight pursers to stop PAL from retiring them at 55, claiming that said CBA provision is unconstitutional and discriminatory against women.-Philippine Airlines

Email ThisBlogThis!Share to TwitterShare to FacebookShare to Pinterest
Labels: PhilippineAirlines

Rapid Handling of Urgent Shipment
In compliance with Republic Act No. 9337, an act amending the National Internal Revenue Code, a 12% VAT is added to the total amount on all transactions involving purely domestic services only.
Our airport-to-airport express service with the following features:

PhilippineAirlines - A group of law enforcers from the San Francisco Police Department (SFPD) are due in Manila this week to conduct training programs with their counterparts at the Philippine National Police (PNP) and visit police stations in Metro Manila and other regions.
The SFPD trip, its eighth since year 2000, is part of the exchange training and educational program with PNP, which seeks to share and impart law enforcement skills and knowledge as well as foster camaraderie with local cops. Over the years, the PNP had also sent a delegation to San Francisco.
Established in April 1999, the program resulted in the formation of the Philippine Exchange Training (PET) Team that laid the groundwork to further strengthen professional ties and mutual learning opportunities among peacekeepers from the two countries.

Among the backers of the program is Philippine Airlines (PAL), which had flown the team in its past visits to the Philippines.  Last year, the national flag carrier gave the US security experts extra baggage allowance to bring paraphernalia for use in their training programs with PNP.

“We are honored to be a part of this undertaking,” said PAL Chairman and CEO Lucio C. Tan. He said that apart from the flag carrier’s mission of promoting the Philippines as a tourist destination, PAL also wants to actively assist in efforts to improve the capability of  Filipino law enforcers. "This is important especially after last year’s Luneta hostage tragedy. We’re glad to help in our small way to provide our local police the needed the training,” he stressed.

The program includes holding of symposiums, seminars and lectures on tactical skills, industrial security, transit security, crime scene investigation and terrorism awareness. Among the training venues are the Philippine National Police Academy in Silang, Cavite, and the Philippine Public Safety College in Makati.

The SFPD team, mostly of Filipino ancestry, is also scheduled to meet and interact with local police officials.

The two cities have had numerous economic and cultural programs following the signing of the San Francisco-Manila Sister City agreement in 1961. -PhilippineAirlines
1 comment: