Philippine Airlines and affiliate carrier PAL Express have rolled out a new promotion that grants passengers a major benefit not offered by other airlines – the advantage of using their promo tickets soon  after buying them.

This bucks the industry trend of stipulating travel dates way beyond the promo selling periods – sometimes for as long as six months later.  As a result, passengers have to endure a lengthy wait despite paying for their tickets in full, depriving them from enjoying the fruits of the promo straight away. 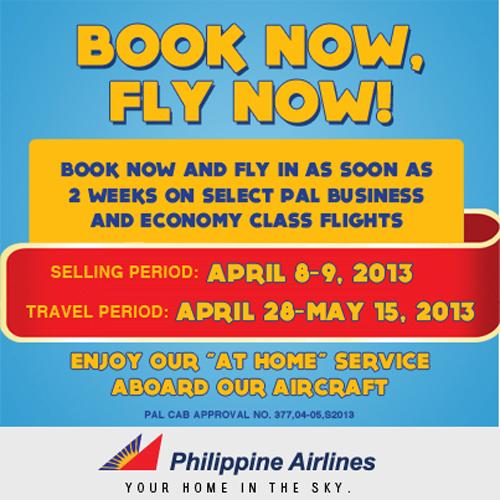 For PAL flights out of Manila, the promo base fares for one-way, economy-class travel are as follows: P688 to Kalibo; P788 to Cebu or Iloilo; P888 to Bacolod or Laoag; P988 to Tagbilaran; P1,788 to Davao and General Santos; and P1,188 from General Santos to Iloilo.

Those who opt to fly business class on any of these routes enjoy a flat rate of P2,500 for one-way travel.


For PAL Express flights from Manila, there are only two promo base-fare categories: P698 to the Visayan cities of Dumaguete, Kalibo, Roxas and Tacloban, plus the Bicol hub of Legazpi; and P1,098 to the Mindanao points of Butuan, Cotabato and Dipolog.  Both fares are for one-way, economy-class travel.

These fares do not include fuel surcharge, service charge and terminal fees.  They are also non-refundable.  The promo tickets cannot be rebooked.

Despite the budget fares, passengers on PAL and PAL Express can expect full service onboard that makes them feel “at home,” as both the airlines’ new tagline put it.

These include complimentary snacks, drinks, periodicals and other amenities.

They also enjoy generous free baggage allowances: 15 kilograms for economy class and 30 kilograms for business class on PAL; and 10 kilograms on PAL Express.  On top of this, both carriers allow 7 kilograms for hand-carried luggage.

Customers can also pay for their promo tickets at over 766 convenience stores of the 7-Eleven retail chain nationwide and select Petron Stations. This mode of payment is applicable only to passengers who book online.  Those who book via the reservations numbers should proceed to ticket offices.