Good news to all our Kababayans in Saudi Arabia (Riyadh and Dammam)! 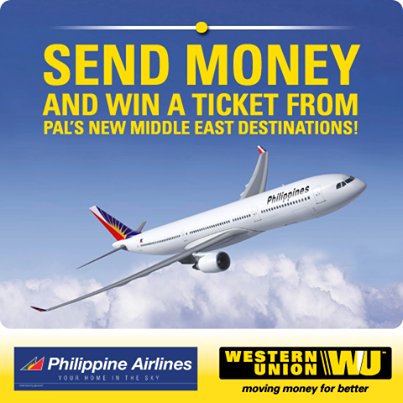 Get a chance to win PAL return tickets when you send money from KSA to Philippines through Western Union!

Residents of Kingdom of Saudi Arabia sending a Western Union Money Transfer transaction
(Money in Minutes) to Philippines are eligible to join or participate in the promotion except employees of Western Union and their immediate families and its Agents and affiliates/agencies associated with this promotion.

Every transaction/MTCN made during the promotion period regardless of amount entitles the customer to one (1) raffle entry and two (2) raffle entries for MyWU or Gold Card members. Raffle entries are automatically entered into an electronic raffle.

There will be a total of four (4) winners weekly for nine (9) weeks or a total of thirty six (36) winners during promo period and to be drawn on 06 January 2014 and 28 January 2014.
Four weekly winners will be drawn as per raffle draw schedule, prizes at stake as :